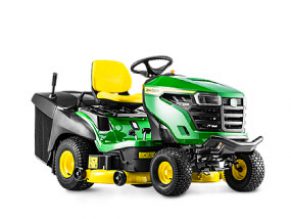 John Deere has launched the all-new M Series front loaders for tractors up to 155hp.

Following the successful R Series announced in 2015, the extended John Deere range now includes an additional four models covering a variety of applications, from standard loader tasks to operations requiring premium performance and comfort. The M Series has been specifically designed for customers who need a versatile, lighter loader at an attractive price.

For tighter working areas often found on mixed or livestock farms, the slim boom profile results in good front visibility to the bucket, attachment points and around the tractor. All models come with a strong mechanical self-levelling (MSL) system, which provides extra breakout force to completely fill the bucket.

With 20 per cent less rear ballast required and 20 per cent less weight than the R Series models, M Series loaders are quick and manoeuvrable in work, with the 603M model for example capable of raising a bucket in four seconds.

All M Series loaders can be fitted with an optional suspension system, while the hydraulic components are routed internally to protect them from any potential impact. The loaders can use the same mounting frames as the established R Series, thus avoiding the need for fleet owners to adapt their existing tractors.